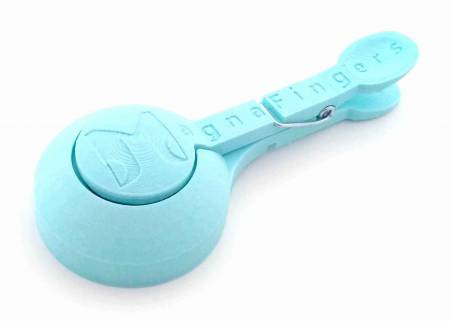 MagnaFingers is a magnetic pick-up tool for pins and needles that easily releases items so you don't hurt your fingers!

MagnaFingers was invented by 13-year old Daniel "Owen" Cowan after he spilled fish hooks on his carpet and wanted a better way to pick them up.  He had long enjoyed experimenting with magnets, but realized that they were inadequate for the job. He would still have to pull the pointy fish hooks off of the magnet.

He pieced together some odds and ends from around his room -- a clothespin, a few popsicle sticks, a circle cut from a cardboard plate, a ring of plastic from a department store clothes hanger, and a magnet -- and hot glued them together. His family found more uses for the tool.  He improved it with a cover in response to his mom's complaint that pins could attract to the top.

Excited about the now perfect tool, Owen's mom investigated and discovered that there was nothing else like it on the market.  At age 15, he was awarded a patent.