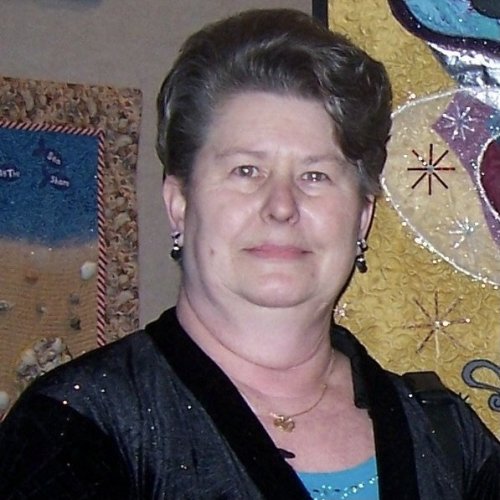 Cindy was raised in the heart of the Appalachian Mountains in Western Maryland, where quilting was a part of everyday life. Her Grandmothers started teaching Cindy to quilt when she was about 5 years old, when they saw she was trying to make clothes for her doll. Cindy made her first full sized quilt, all by hand, pieced and quilted, at the age of 10. Her grandmothers started with cottons of the times (1950's) but encouraged Cindy to experiment with cotton/polyesters that were coming out and to use other fabrics.

Cindy was taken to traditional old-fashioned quilting bees at the church's and at the homes of her grandmother's friends. Cindy learned to use different color combinations from the bees and started her experimenting with colors and textures, which in turn, led her to experiment with more of the different non-traditional fabrics for quilting. At the same time, Cindy was learning to construct clothing from her mother and was putting the two together. While in high school.

After high school, Cindy joined the military - US Women's Army Corps and this is where she met her husband. When their children started arriving, she elected to no re enlist in the military, but the military still played a big part in her life, because her husband stayed in the Army for over 26 years. The different places that the military sent Cindy's husband and her has greatly influenced her designs and quilting.

Because Cindy grew up on a farm, her love of quilting is firmly rooted in realism versus abstract. But is working toward to expanding her work into the abstract. Cindy also loves creating pieces with realistic ideas , no matter, the design, using unusual fabrics, embellishments and glitz to create different textures and drawing on her experiences of living overseas in different cultures.

Cindy taught her first class in 1974, to friends who wanted to learn quit making and went on from there. She has taught locally, regionally and internationally. Cindy has won many ribbons - - Best of Show, 1st & 2nd place, received a Special Award from the Japanese National Defense Force of Okinawa for two of her quilts, was one of the semi-finalist worldwide in the Great American Quilt Contest for the Statue of Liberty in 1986, and her 1997 wall hanging traveled across then United States and Canada in a Hoffman Challenge Show.

Cindy also likes to participate in quilt challenges, both locally and on the Internet. She usually turns her designs into workshops to teach. Cindy was a nominee for "Quilt Teacher of the Year" Spring 2002, in the Professional Quilter Magazine. And in 2005, she had a set of her patterns published in a book titled "Baltimore Beginnings" And Cindy's latest book came out in 2014, titled -- "Mariners Compass Quilts" published by Schiffer Publishing. Cindy has been quilting for over 60 years and teaching for 42 years. She  lives in Woodbridge, VA with her husband and 16 year old granddaughter and 3 cats.